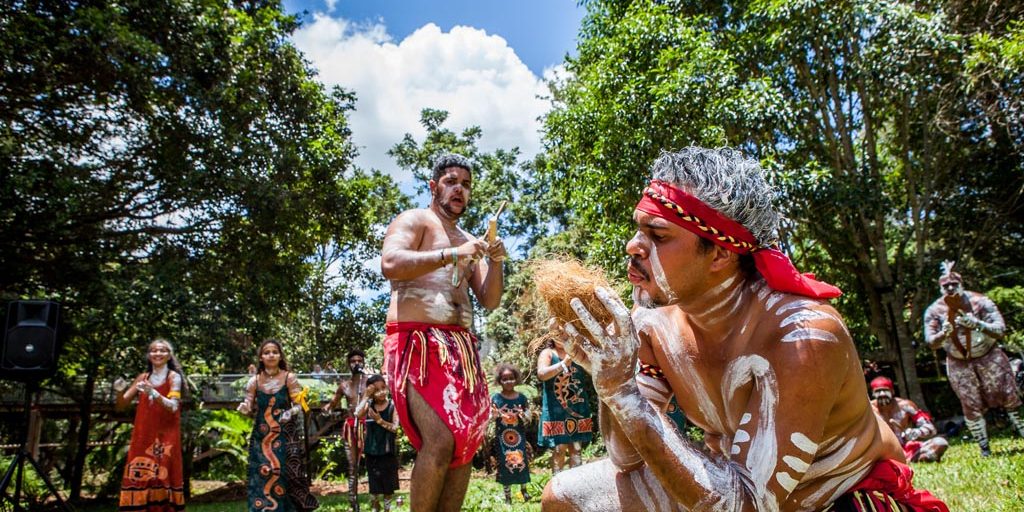 Since the very beginning of our organisation in 1985, organisers of the then called Queensland Folk Federation (QFF) said that ‘if we are to concern ourselves with the development of Australian cultural expression, it should begin with Aboriginal people’. We were bright eyed and innocent folkies enthusiastic about correcting the terrible injustices Indigenous Australians had endured and were enduring. We were idealists.

The very first Maleny Folk Festival in March 1987, now called the Woodford Folk Festival, featured a group, mostly children under the supervision of elders from Cherbourg. We noticed just how popular it was because at the time there were very few places that you’d see Aboriginal people participate, or even just see Aboriginal people. We talked to Uncle Archie from Cherbourg and he told us that it was one of the few places they felt welcomed and that they really enjoyed the crowd. They did boomerang displays and talked lots to our patrons.

That began a relationship and a commitment that so far has lasted three decades.

It’s been a bumpy ride and fair to say that not everything we did was unanimously supported by all Indigenous people. Like all idealists, we were often misguided. Our relationship with Traditional Custodians was stretched at times as in the early years we got caught in the middle of Aboriginal politics torn apart by High Court rulings of Mabo and Wik. This divided Indigenous Australians often at family levels and created the culture of ‘claimants’ — the legal practice of asking Indigenous people to prove their ‘connection’ to crown land if they wanted to claim some ownership of ‘unowned land’. Newspaper headlines distorted the blanket claims that Aboriginal groups were forced to make if there was to be any chance of claiming even a small parcel of land or even some recognition of their heritage. These claims gave way to irresponsible headlines saying Aboriginal people were claiming the whole of Brisbane, for example, which spread fear that people would lose their homes. This drove the Indigenous divide in our country further and this, in the age of reconciliation. That Aboriginal sovereignty has never been ceded to anyone, for many Aboriginal people, was another act of ‘divide and rule,’ irrespective of its good intentions.

We weren’t trusted by our new found Indigenous friends and it wasn’t hard to see why.

Years later, one outcome, of many great outcomes from that legal setting, happened at Woodfordia. On the 20th November 2012, The Supreme Court’s Native Tribunal formally sat at the Duck venue at Woodfordia. Jinibara families came from miles around to hear the court determine that Jinibara be given formal recognition of their existence along with some small freehold land and rights to Commonwealth land for traditional use. When we looked at the decision we thought ‘is that all’ and wondered why the Jinibara families in attendance were so joyful, almost teary. It was the recognition that was so graciously sought — that was more important than anything else. How is it that people, who’s connection to all land, must seek recognition?

But it was a landmark moment for the Jinibara people and all Woodfordians could rightly feel some very small part of it — we shared in the joy.

Over the years, we made lots of errors, were at times paternalistic and failed to deeply understand how Aboriginal people operated and felt. We observed the difficulty Aboriginal people had trying to marry their own inherit culture with the ever-changing and ever-growing screw tightening capitalism that underpins our own culture and in our own Woodfordian battle to stay afloat. We’ve observed just how close tragedy is in the lives of every Aboriginal person. Sometimes it feels that Aboriginal people are fighting for their cultural emancipation especially when we see the destruction of 200 complete languages and an incredible amount of Indigenous lore attained through 50,000 years of continuous cultural heritage gone. Gone.

We tried lots of things at our festivals to varying degrees of success — remaining still is our extensive Murri programme that populates an important part of our annual programmes. There were six Dreaming festivals and while our intentions might be commendable, our practical attempts to engage Aboriginal people has not had the outcomes we had hoped it might. We must keep trying, keep changing. But there have been many achievements along the way. We introduced an idea of Sim Symons’ for a Permission Ceremony back in our early Maleny years. We sought permission from Traditional Owners to have the festival. That year Richard Walley and Ernie Dingo, both successful Aboriginal activists and performers, witnessed this and according to them, inspired by what they saw, went home to Perth and wrote a “Welcome to Country” ceremony which has spread Australia-wide. We think our festival has had real consequence on the careers of Aboriginal performers and we think that many festivals in the country would consider Aboriginal participation a natural part of their programming because of our work. There’s plenty more.

There has been one great prize though. Over the years we have met and became close to some very special people. We learnt of what generosity of spirit really meant from these people. It’s as if they came from a different planet than the one we live on and they could move in and out of our culture with ease and with goodwill. It is a gift not easily and rarely graciously received. Australian Indigenous people are really our nation’s Royal Family and we hope in time that this is the sort of recognition that’s required. Not because it’s correcting the injustices which we must, not because there’s an inherit debt to Indigenous Australians which there is, not because it’ll remove the embarrassment of a wealthy nation that ‘can’t afford’ to ‘close the gap’ which we can, but because if we don’t, we’ll miss out on people and cultures so very precious to this country and beyond, that we so desperately need. Everyone who’s ever worked closely with Indigenous Australians will tell you that.

Over the past year we’ve worked with Jinibara people to help establish the Jinibara Dance Troupe by hosting training camps at Woodfordia and featuring the troupe at the recent Woodford Folk Festival. This support will continue. We’ve helped establish the Jinibara Gallery and now we’ve launched Woodfordia’s Traditional Custodians online shop which we’re hoping will assist our Custodians in their quest to retain some traditional skills in making artefacts. We hope for commercial success that could stimulate Jinibara’s presence. Jinibara people are striving for high standards in the craftsmanship but more importantly, an authentic expression of Jinabara culture — the stories, the symbols and the respect.

These artefacts are not fake. Their symbols adorn the many artefacts and many proudly feature their name. While modern hand tools are used, each one is hand crafted by Indigenous artists using skills learnt the traditional way and made with a very old fashioned commodity called love.