You are here:
Artists 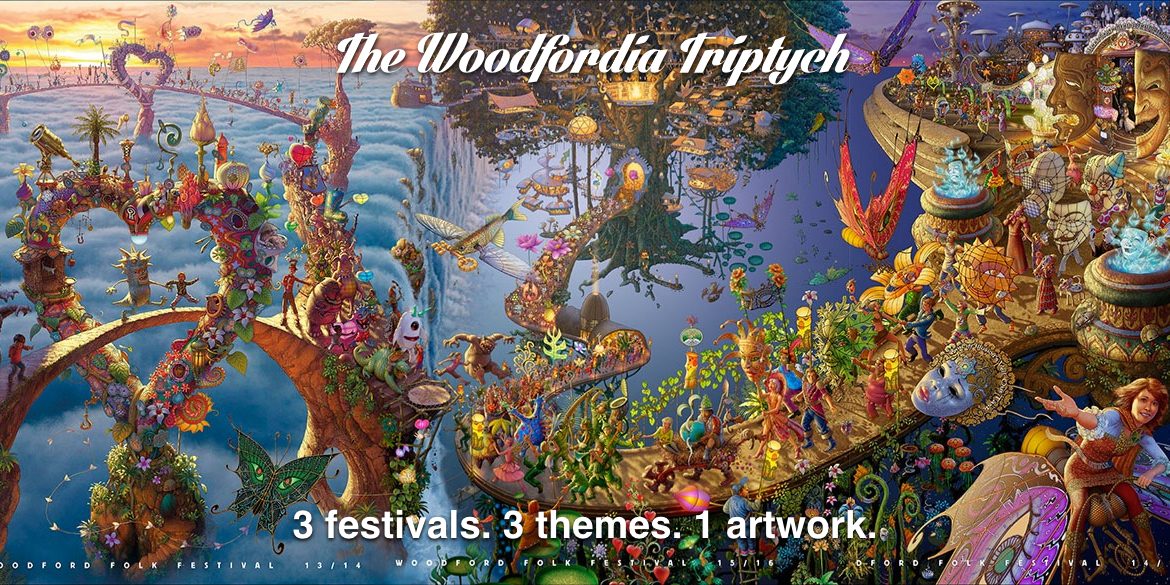 This year marks the tenth anniversary since I debuted my first poster for Woodford Folk Festival. That first invitation came off the back of an exhibition of my own creative output at the festival the previous year and has become a regular feature of the Woodford brand.

My artwork has covered many different styles, techniques, media and subject matter over the years, but is very often illustrative and highly detailed, rich in symbolism and allegory… at once, bright, fun and colourful at the surface while often unveiling more thought-provoking satirical revelations on closer inspection… all traits that I have found to be completely in tune with the Woodford ethos.
The annual announcement of the each year’s new poster has become a much-anticipated milestone on the approach to the festival itself, establishing the current theme and creating a tantalising foretaste of many things that will be experienced during the festival itself, particularly the Closing Ceremony/Fire Event theatrics.

Three years ago, when the veils came off the 2015 Woodford Folk Festival poster, a not-so-little surprise we had been quietly plotting for a long time in secret suddenly became apparent. The 2015 poster was revealed to be not only a self-contained composition in it’s own right, but also the central section in a wider composition: a triptych that bridged both of the previous year’s designs into one huge tableau, linked thematically by an overarching conceptual narrative.

The resulting buzz around this huge image has continued to resonate widely and many were keen to see it become a regular feature.
And so, for the last three years, we have been working towards a new triptych but having lost the element of surprise this time round, the mystery and anticipation surrounding this year’s poster design and how it will bridge the two preceding works will be the primary raison d’etre.
The theme linking all three posters is “We Are All Connected”.
In the first panel of the new triptych, the 2016/17 poster, this theme focused on We Are All Connected To Each Other and focused on the narrative of that year’s Fire Event production and it’s two main characters, their separate tribes and shared destiny. It featured an elaborate beacon… itself a symbol of connection and communication.
The second panel, last year’s poster, with the stylised coral reef imagery, represented our connection to nature with the interconnected nature of the coral reef biosphere being the perfect allegory for this theme, especially in light of the fact that the International Year of the Coral Reef began during the festival. And as usual there were references a-plenty to the upcoming Fire Event theatrics and ceremony in the mix as well.
Which leads to the final piece of the puzzle, this year’s design.
What will it be?
How will we connect a triptych about being All Connected, bearing mind the need to create a seamless transition across all three posters and incorporate the visual and conceptual elements that straddle the common borders on each side while simultaneously maintaining each individual poster as a self-contained design in it’s own right? These are the sort of complex design considerations I have been called upon to solve on many occasions and each time it is a very delicate balancing act with many compromises and tricky slights of hand.
I am about to start work on the new design. At this stage we have a strong lead upon the way we might proceed but, as with every year, it may undergo many iterations on the way to its finished draft.
What does the phrase, “We Are All Connected” mean to you?
I spend around four months every year labouring over the design and completion of the poster artwork. I work digitally because all the elements need to be on separate layers so they can be utilised in other ways for other purposes even though I would love to, one day, do this work the old fashioned way, with real paint and brushes….
Real paint and brushes is what we want you to use though. We invite YOU to put the same sort of effort into YOUR interpretation of “We Are All Connected” and make the most beautiful, rich and heartfelt expression you can conjure. Show us YOUR vision!
We have not determined exactly how we will feature the hopefully rich and varied influx of entries, apart from, at least, a comprehensive web gallery
Hope we can catch up later and nut out what next…