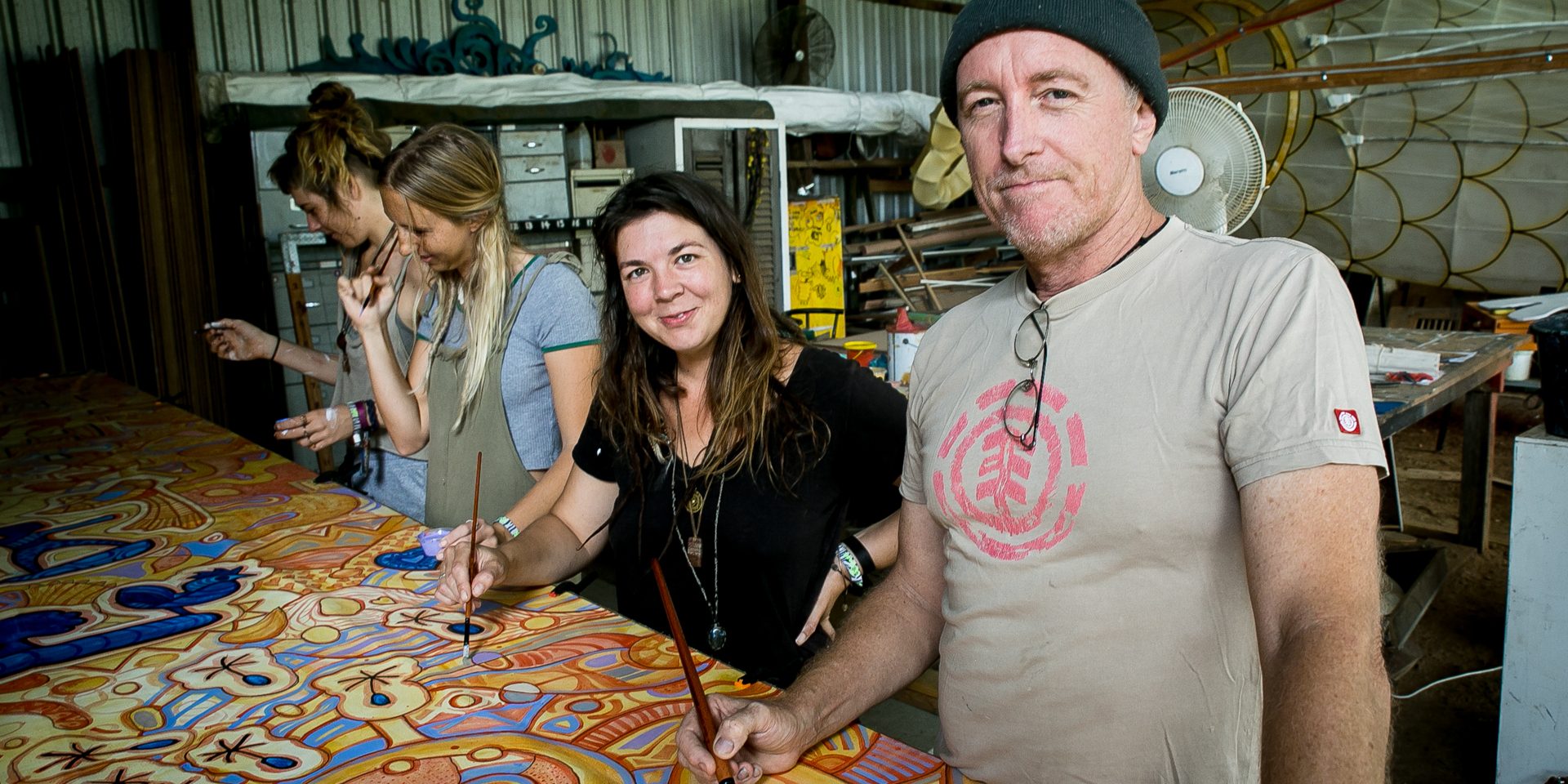 Anyone who has attended Woodford Folk Festival in the last ten years will recall with great delight Gavin Ryan’s phenomenal posters. Each one is a vibrant visual feast that proffers a jaw-dropping amount of detail, usually taking him up to four months to complete. Much like the festival that they represent, these posters are not intended to be absorbed in a hurry. They invoke a sense of wide-eyed-wonderment, seeming to hold out a hand and invite the viewer into a world brimming with possibility. And as any Woodfordian will happily tell you, the seven-day happening, which closes out one year and welcomes the next, is more than just a “festival”, more than an “event”. No one word can contain it. It is a coming together of souls; a bubbling cauldron of expression and creativity; an exploration of self as well as the ebb and flow of a passionate and open-minded community. The sheer number of musical acts, installations, workshops, stalls and talks makes it impossible to see it all. Pulling this off every year is certainly no small feat and neither are Gavin Ryan’s meticulously crafted artworks.

Artistic flair runs in Gavin’s family and he was surrounded by a lot of creative energy growing up. His mother, Daphne, was an amazing illustrator and animator, and his father, Ted, was a professional model maker. Gavin’s Aunt Anne and Uncle Dennis were both amazing artists as well, so it’s no surprise that he excelled in high school art. Determined to make a living from his passion, he started doing freelance illustration gigs in year eleven and kept it up after school. In 2007, Gavin, who was living in Northern Queensland at the time, ventured to Sydney to exhibit his collection, Sex and Death… and Shopping. The show delivered satirical observations on consumerism, evolution, politics, religion and environment, as well as our collective dysfunction around the subjects of sex and death. Gavin’s artworks utilised a wide range of styles, media and techniques, not to mention unflinching humour and savagery. He sent some examples of his work to Woodfordia and when they reached the desk of Festival Director, Bill Hauritz, Gavin was promptly invited to exhibit his collection at the 2007-2008 folk festival. Bill recognised not only Gavin’s profound artistic talent but his innate ability to communicate powerful and meaningful messages to his audience. He asked Gavin to join the Woodfordian team on a more permanent basis and tasked him with designing the official Woodford Folk Festival poster for 2008-2009. Gavin has designed all subsequent posters and is Woodfordia’s own Artist in Residence. However, in true Woodfordian style, Gavin realised that his mission was perhaps not destined to be a solo one. 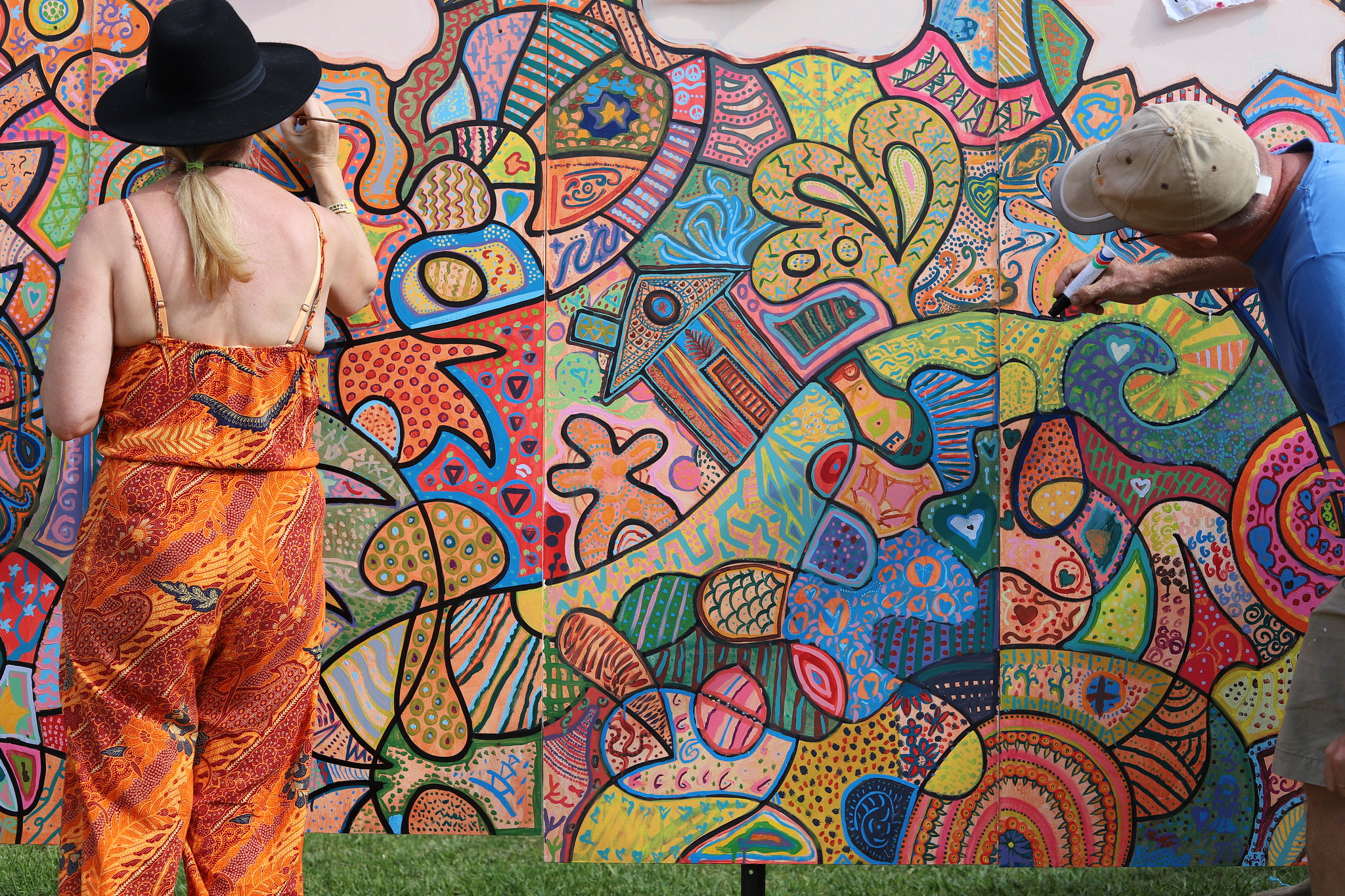 In the lead up to the 2016 Planting Festival, he oversaw a series of murals to be painted by the many eager hands of the festival community. Whilst Gavin was responsible for the line work and overall composition, it was left up to the public to bring his design to life. Budding artists were provided with fine-tip brushes to encourage small strokes and thoughtful detail, while Gavin’s volunteers provided advice and assistance, as well as adjusting and integrating the disparate contributions into a unified whole. The resulting murals became a resource; a set of decorative panels that could be placed wherever a strong visual was called for in the festival site layout. At the 2017 Planting, Gavin and his creative comrades completed another set of murals, which became the festival site’s toilet doors and were aptly dubbed, The Loo-vre. Utilitarian in nature and decorative by design, they are a testament not only to Gavin’s work but to the giving, enthusiastic and inventive community of Woodfordia. It was a no-brainer; the public mural would become a fixed feature at The Planting festival. 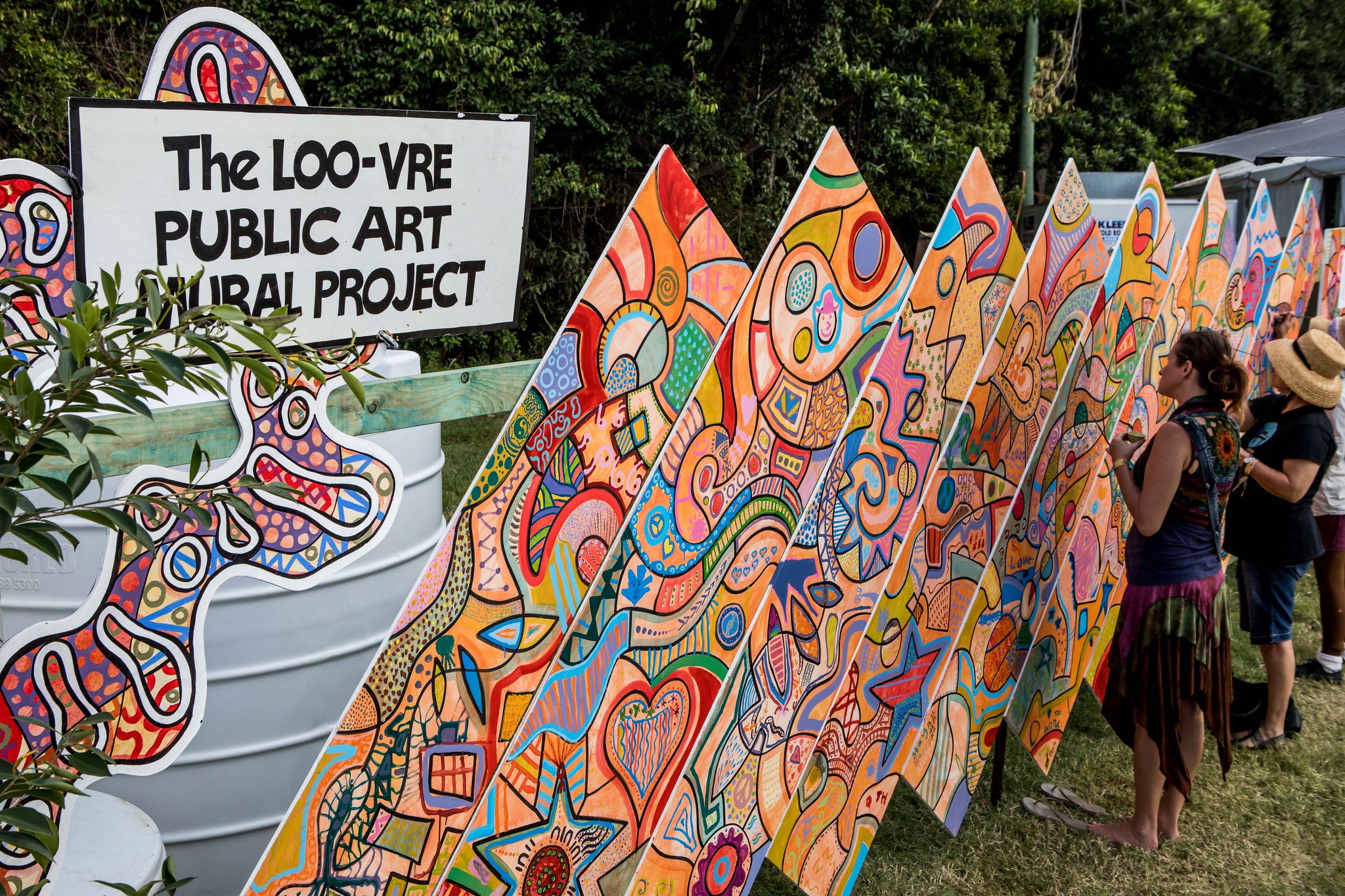 Each year, Gav’s poster design process starts with the development of an overarching theme, which will underpin many facets of the coming festival. The theme for the next three festivals is, ‘Imagining a Beautiful Future’. Bearing in mind global zeitgeist, Gav found this to be a particularly potent theme and decided that making the switch to a hand-made, community driven process resonated deeply with this message. Everyone on site at the 2019 Planting festival and all those who attended Parliament Day had the chance to contribute to a mammoth 4.8 x 3.4m canvas. The project was run in the same way as his previous smaller-scale collaborations, with Gavin as creative director and his vollies keeping things on track. “Both events were filled with Woodfordians eager to add their mark to the collective vision and the palpable sense of achievement felt by all those to who stood back to survey the finished piece at the end of proceedings was a wonderful validation of the change of process,” says Gav. Compared to the last ten posters, it is a complete change in artistic direction for Gavin but one that he believes better represents the festival and all those who take part in it. He finds tremendous meaning in the notion that this is artwork of, by and for the people of Woodfordia, explaining that, “The rich visual treat that has been created in this community-driven process is a potent example of the total being more than the sum of its parts, in the same way that the festival itself is.” 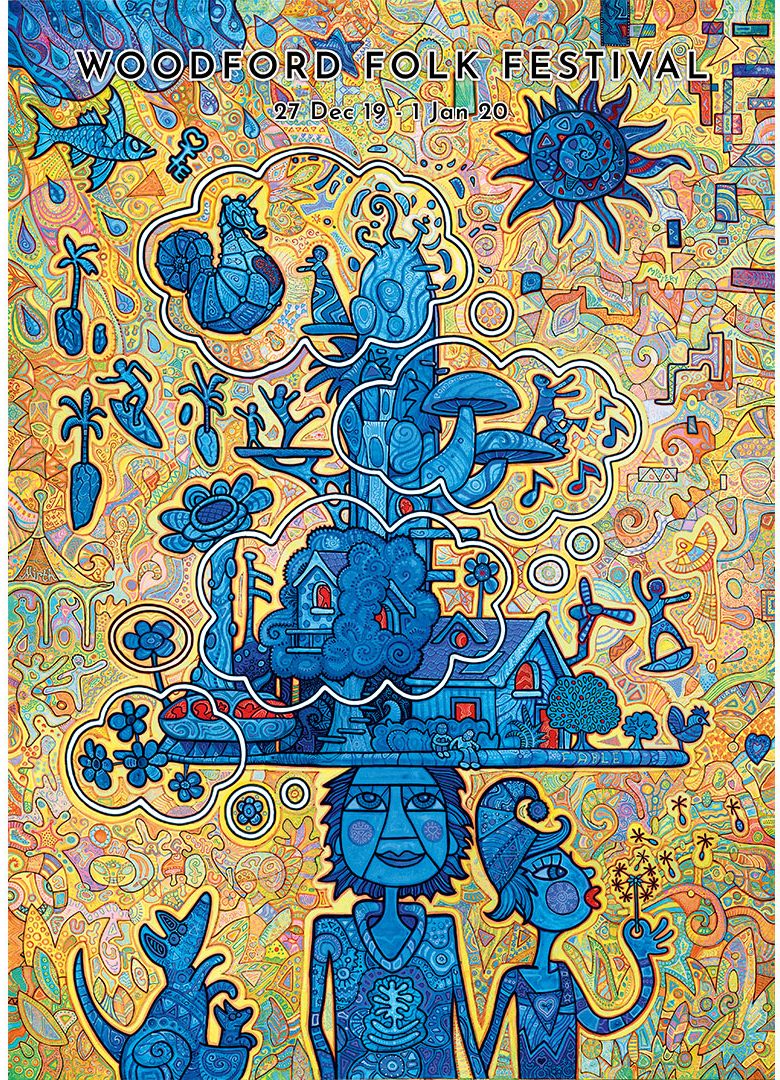 Gavin has attended every festival since his first in 2008 and is a much-loved member of the Woodfordian community. Last year, Gavin lost his beautiful wife, Fey, to breast cancer. She was also immensely loved by her extended Woodford family. Fey was a yogini and had run classes in the Blue Lotus before the condition began to impact her ability to do so. A fig tree was planted with her ashes up on The Hill behind the big chair. Fey continues to be an inspiration to Gavin and his work and will live on in the hearts of all those that knew and loved her.