You are here:
Behind The Hessian FencePeople of Woodfordia 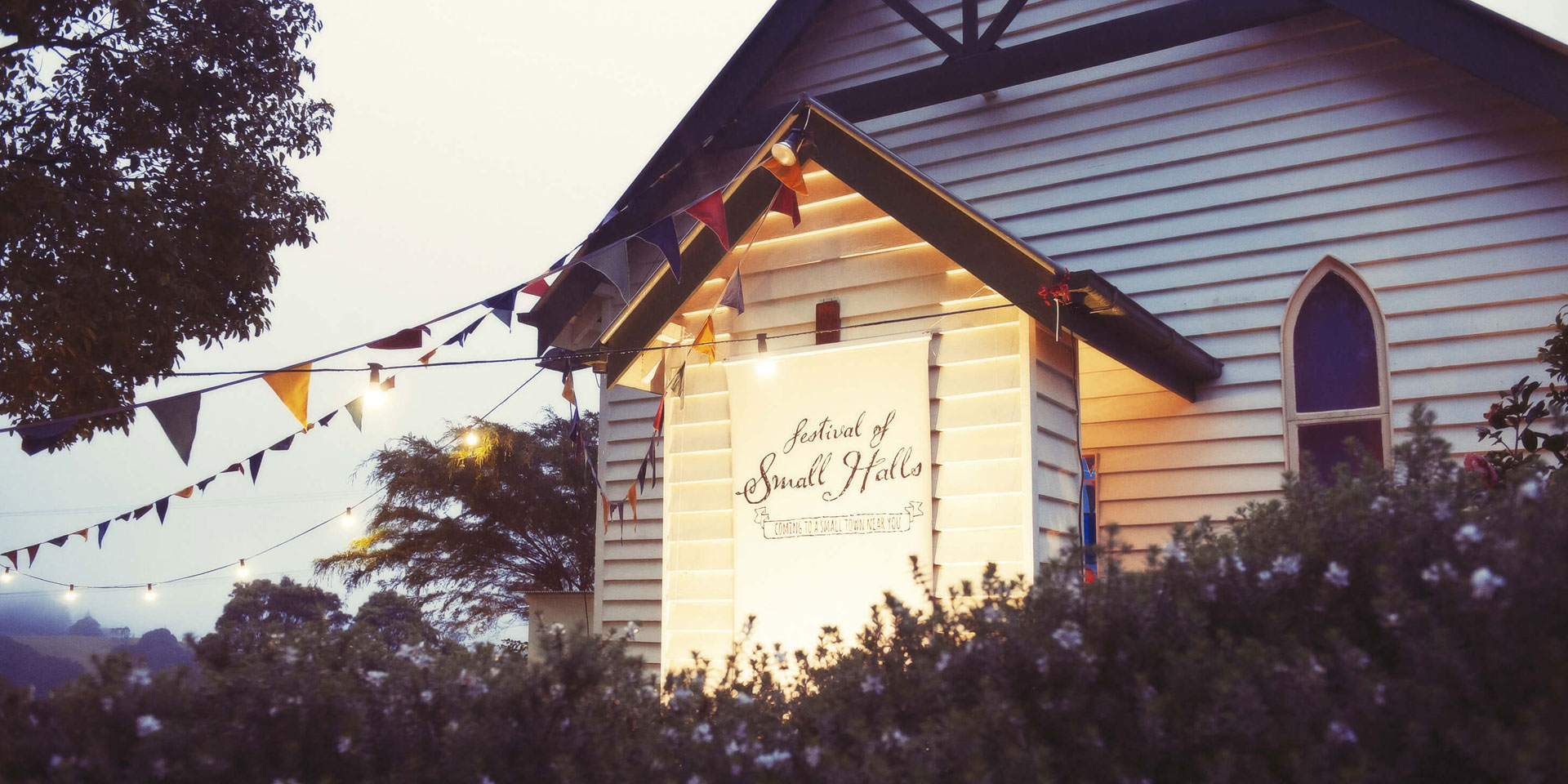 Like many of the wonderful humans that hustle and bustle Woodfordia’s halls, Eleanor Rigden never intended to end up there. She studied law alongside a Media & Communications degree, eventually specialising in immigration law. Eleanor was admitted as a solicitor to the court of Queensland and was practicing for about nine months before being made redundant. With a mammoth amount of university behind her and faced with the daunting task of looking for a job, Eleanor was sitting in a bar one day feeling a little dismal. It seems, however, that the Woodfordian fairies were working their magic that day. Karen McBride, Woodfordia Inc.’s Volunteer Manager, just happened to be in that very same bar. Eleanor had attended her first Woodford Folk Festival two years earlier, volunteering as the OP Camp Manager. She followed up the next year working for McBride in the happy land of Volunteers Administration, so the two ladies knew each other quite well. They got to chatting and less than a week later, Eleanor found herself manning the front desk up on site at Woodfordia. The Front of House Manager at the time, Vanessa, was only days away from starting her maternity leave and her replacement had not yet been found. It seemed it was meant to be. 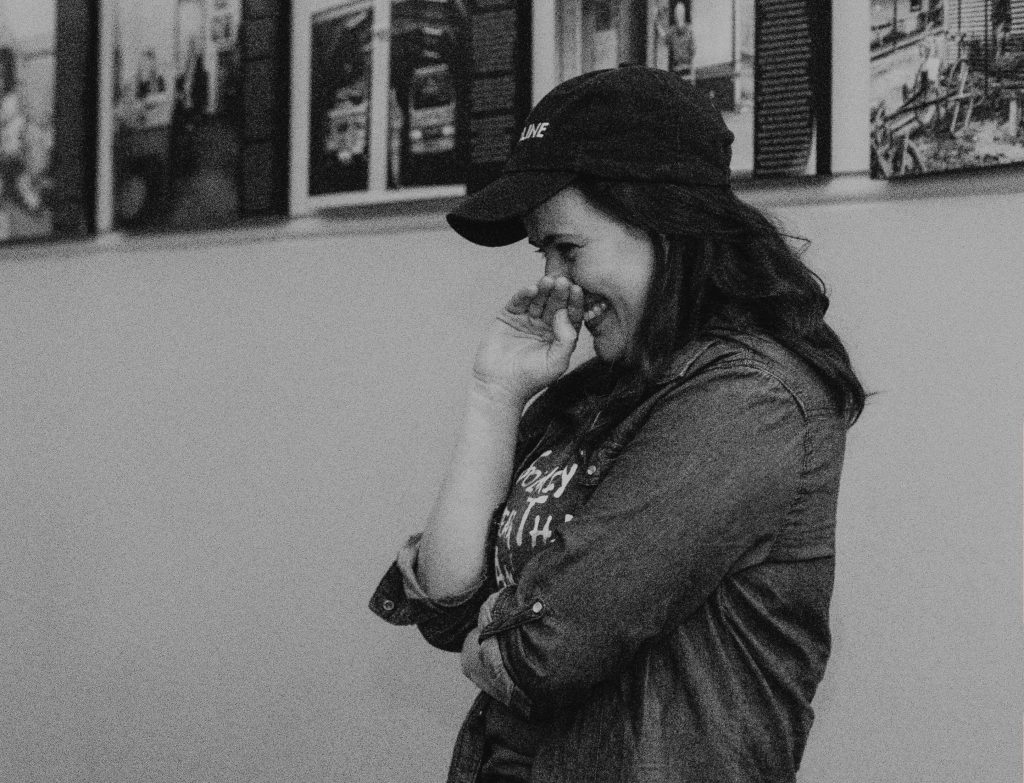 Eleanor is moved to tears at Ganmain Hall when half the town & touring band, The Once, sing her Happy Birthday. Photo courtesy of: Down Brushwood Road

As well as being the smiling face that greeted visitors at Woodfordia’s front door, Eleanor was tasked with running the gates at the 2016-2017 Folk Festival. It was, at the time, the festival’s largest attendance to date. Eleanor explains that it was a very exciting year to be in that role, as they had the opportunity to feed in a lot of new processes, while still learning a lot along the way. Upon another moments reflection she confides, “Actually running the gates was a terrifying experience. I felt underqualified, undertrained, under-everything.” She smiles. “But I think we nailed it. We had the most amazing team and it fed into what is already an amazing organisation. At the end of the day, the gates opened and then closed again. Nothing blew up or lit on fire!” 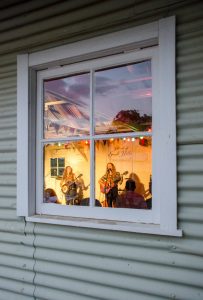 Vanessa was about due to return and Eleanor’s contract was nearly up, but she decided she wasn’t quite ready to part with her newfound Woodfordian family. She went to Bill and Amanda and expressed her keen interest in staying on, suggesting that she might be suitable for a role in the media department, considering her tertiary studies. Eleanor crossed her fingers but received no word of a job, so she began interviewing for others. The team threw her a leaving party, gave her cards and flowers and eventually her last day at Woodfordia rolled around. Her phone rang that day. It was Bill. He’d found a new position for her; would she stay on as the Producer of Festival of Small Halls? Eleanor was elated and could only laugh slightly manically at the last-minute nature of the offer. There’d been cake and wine at the leaving party after all! So, in March 2017, she moved into her brand spankin’ office, ready to start a whole new Woodfordian adventure. 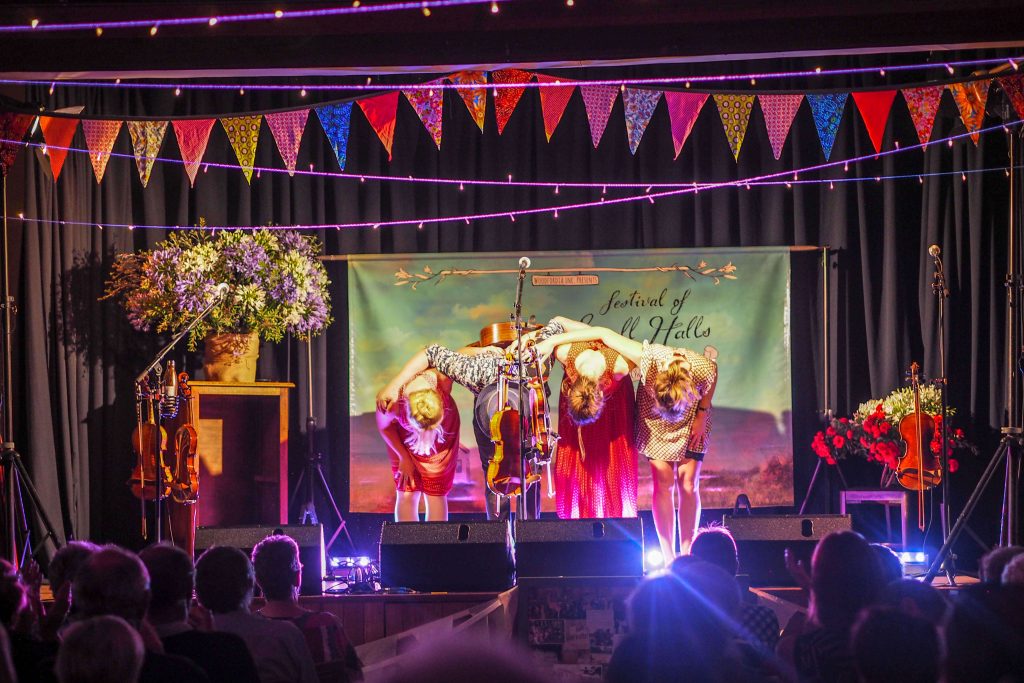 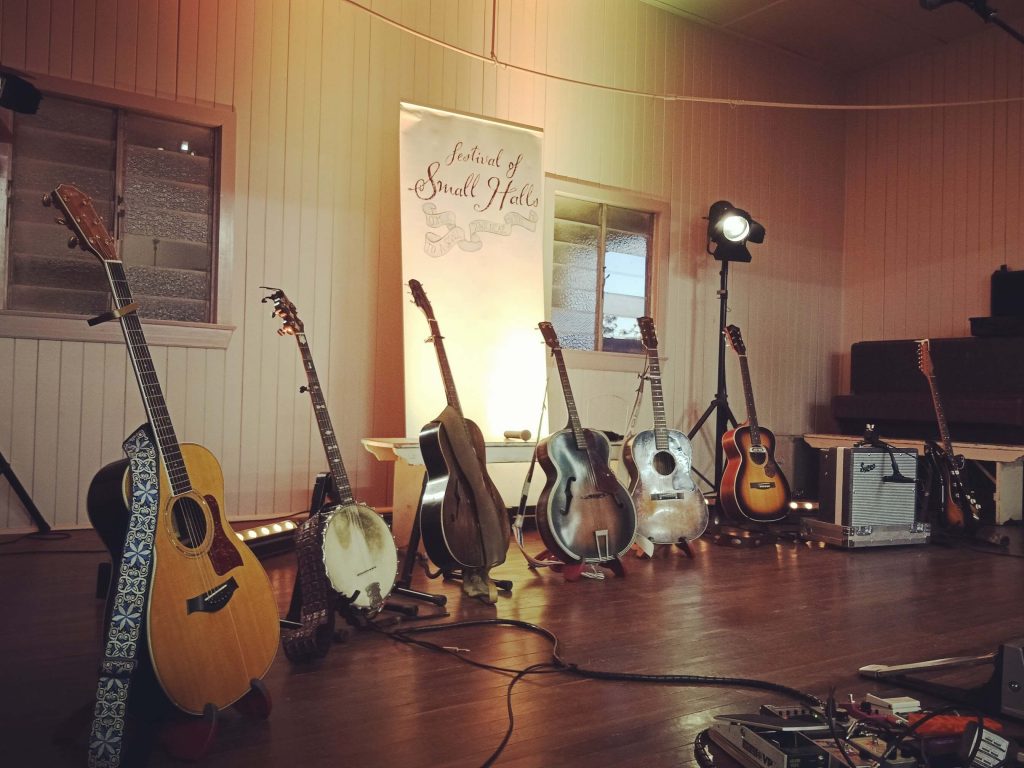 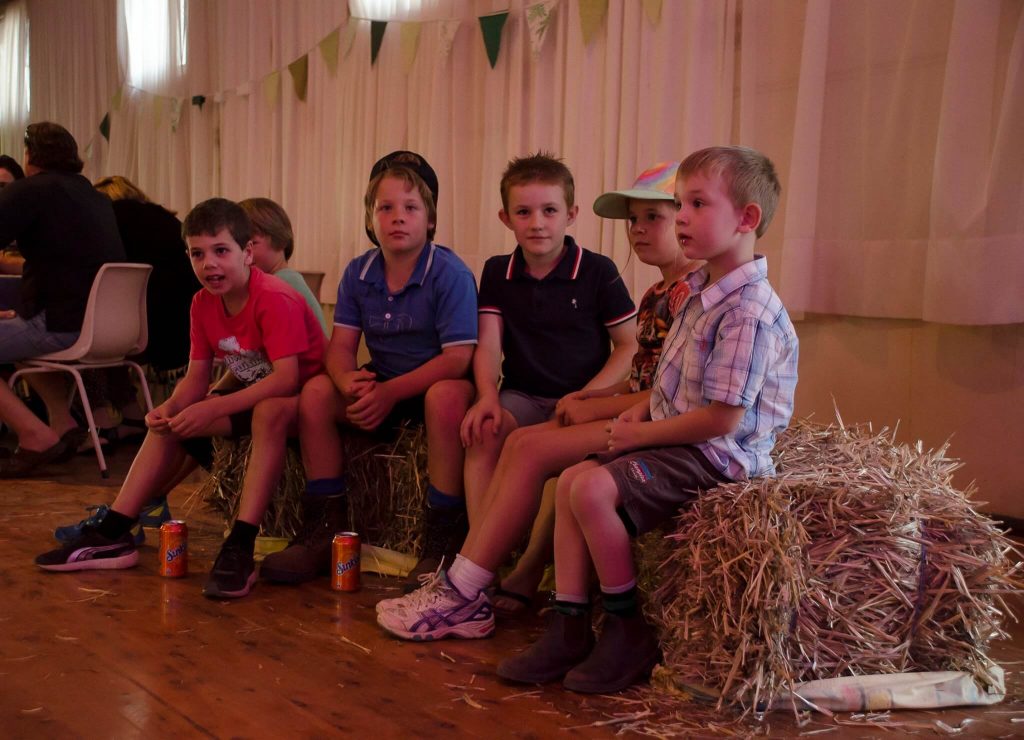 The much-loved Festival of Small Halls had been in hibernation for a year and Bill and his team were pushing hard for funding and support from the Queensland government to get it off the ground and on the road again. Thankfully, their pushing paid off and FOSH was given the backing it so deserves. It would be hard to deny the importance, brilliance and necessity of this project. FOSH is, in a nutshell, a unique touring festival that brings exceptional folk music to small, rural towns across Australia. And yet it is so much more than that. It is community spirit, pride and inclusion. It’s homecooked feasts, dancing boots and old friends. It’s laughing, crying and celebrating together; sharing music, food and one another. Eleanor’s eyes alight with joy and awe as she speaks of her time spent running this special happening: “The whole thing is just one inter-woven, insane tapestry of courage and community pride. It’s just so, so wonderful.” 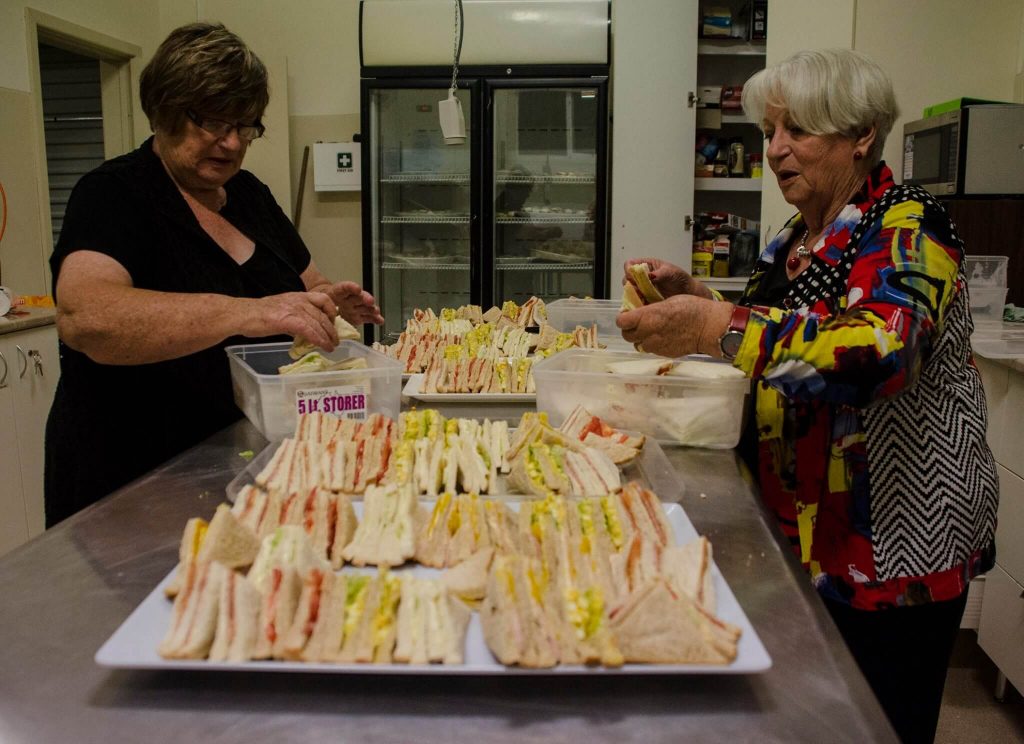 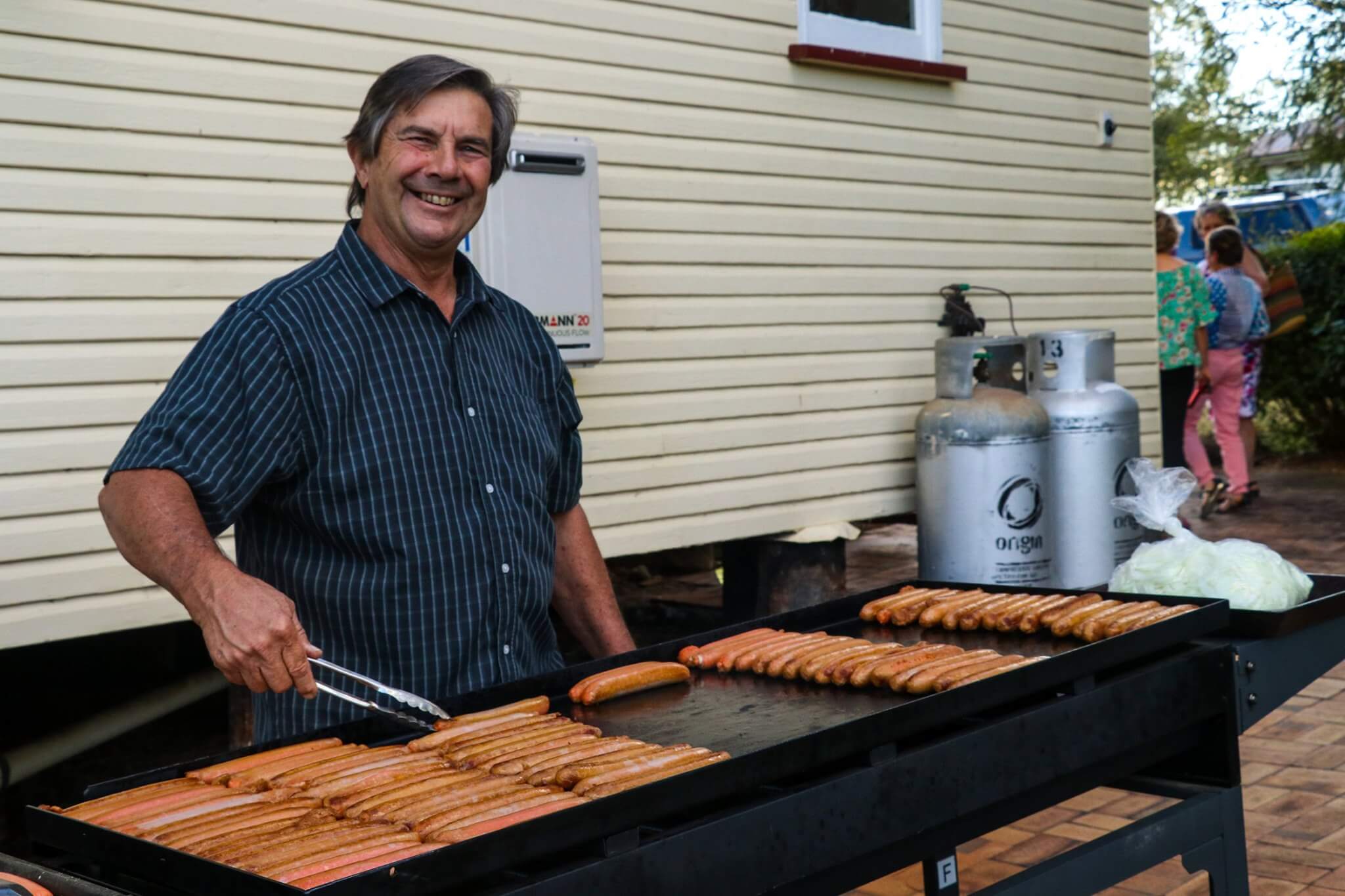 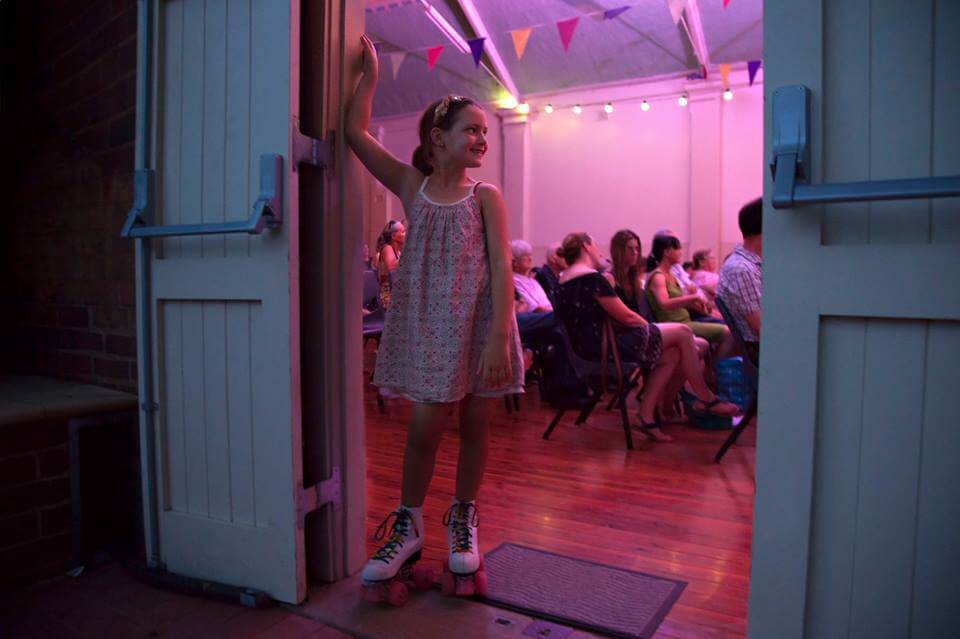 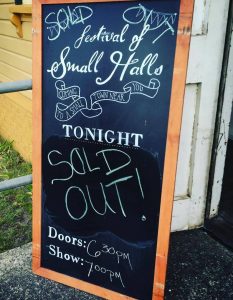 The original idea for Festival of Small Halls comes from our mates over in Canada and started on Prince Edward Island back in 2008. The festival runs for just shy of a month, with artists visiting rural venues right across the island. Woodfordia’s Head of Programming, Chloe Goodyear, was in Canada some seven years ago and was immediately taken with the idea of bringing FOSH to Australia and adapting it into a touring circuit. Having a tonne of experience in tour management herself, Chloe knew that Australia didn’t really have a tour circuit to speak of, not like the ones in Canada and the USA. When international artists come to Australia, they visit Sydney, Melbourne, usually Brisbane and that often tends to be the extent of their trip. Of course, there are a lot of artists that do venture into the regional parts of the country, but they are still quite particular stops. So, Chloe and her team launched Woodfordia’s very own Festival of Small Halls. Bookended by two music festivals, the tour bundles together one Aussie and one international act for a string of shows in some of Australia’s littlest but certainly not forgotten towns. The Spring Tour 2019 hits the road on 30 October and features remarkable Aussie duo, Ash Bell & Sara Tindley, alongside stunning Scottish folk duo, The Jellyman’s Daughter. There’s not much time between drinks, with the recently announced Summer Tour 2019 kicking off shortly thereafter. High-energy Aussie duo, Hat Fitz & Cara and award-winning British singer/songwriter, Blair Dunlop, will be bundled into the tour bus and make their way up the east coast of Queensland, first stopping in at Mt Nimmel Hall, Austinville. 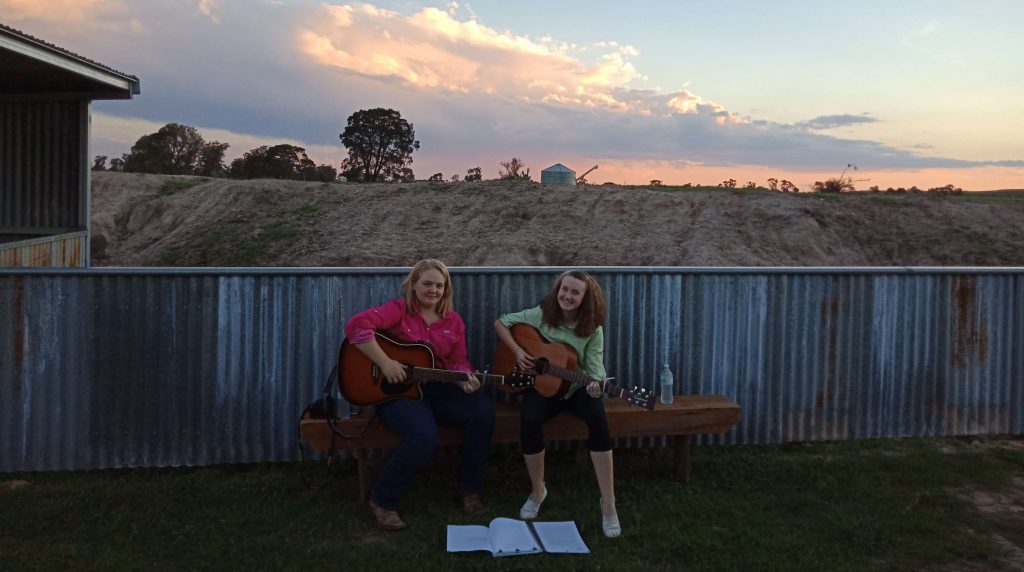 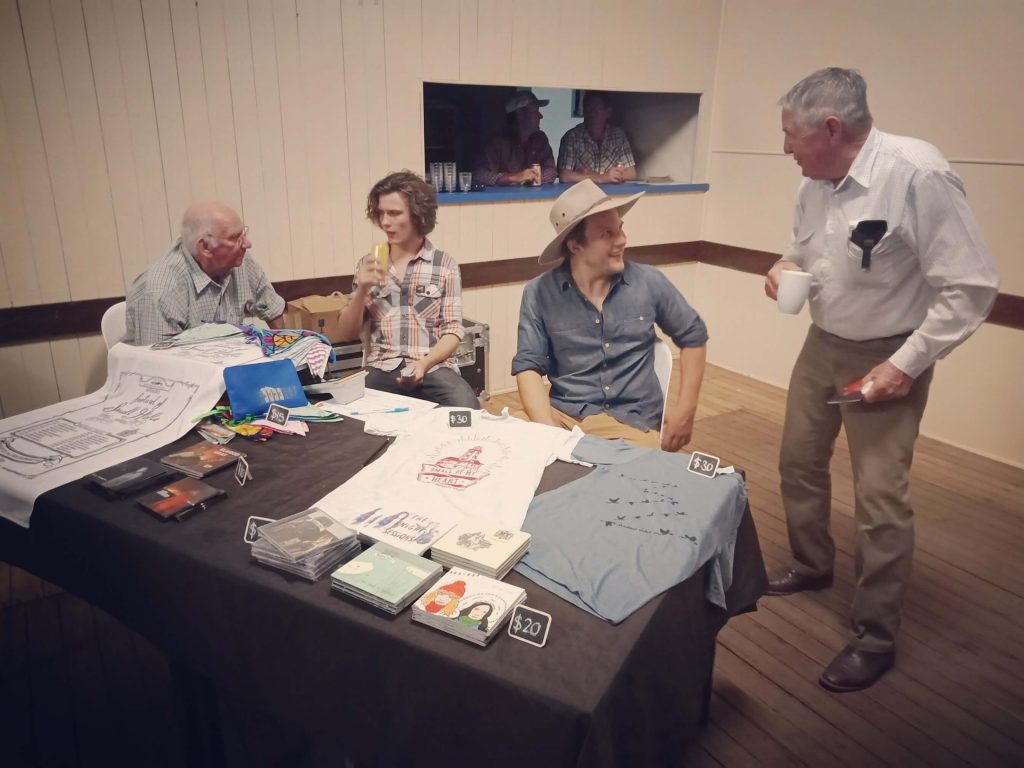 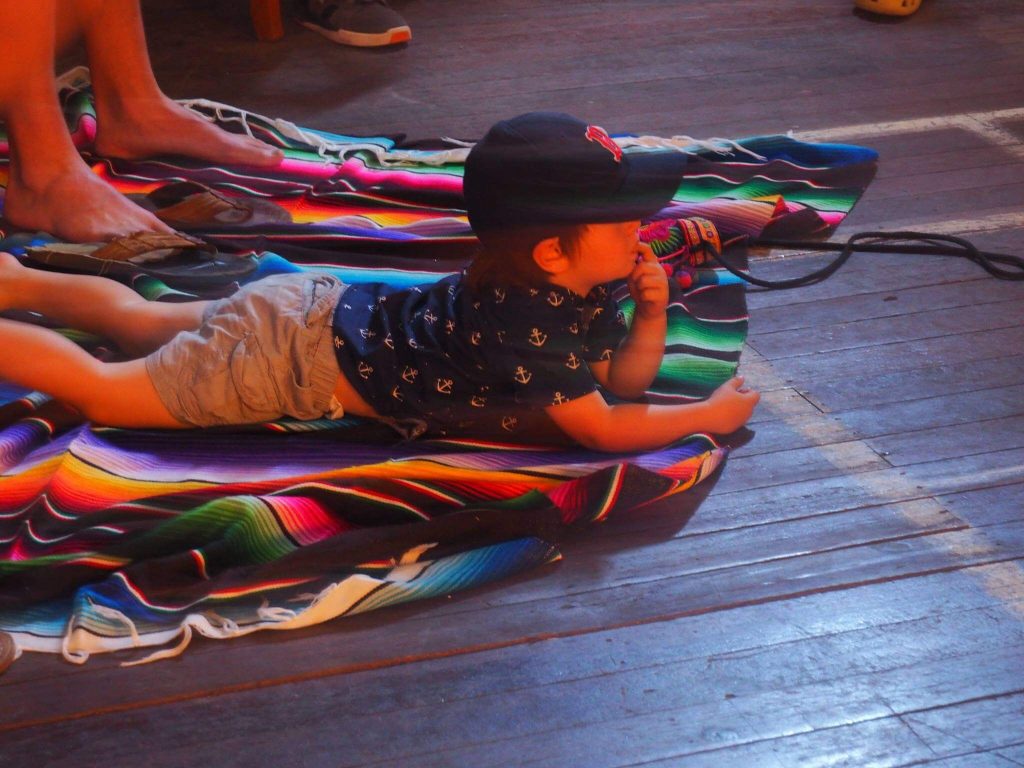 In the early days, the FOSH team spent a great deal of time scouting out potential towns for artists to visit and contacting the locals. Even when Eleanor first stepped on the scene back in 2017, she found she was still doing a fair bit of scouting. These days, however, the towns tend to come forward themselves and the festival seems to be promoting itself through the tours. The good word is spreading with the music. When asked if there were any towns in particular that gave birth to a good FOSH story, Eleanor was somewhat lost for words: “I could name almost any hall on any one of those posters and pick out a story about our beautiful interaction with them or how they built something for themselves. That’s why it’s so hard to pull stories out of Halls because the whole thing is just one big bonanza of excellence.” Eleanor climbs up on her desk, seeking inspiration from her wall of FOSH paraphernalia. She pulls down an engraved wine glass gifted to her from the people of Jiggi, a little town in northern NSW. One of Jiggi’s patrons had been unable to listen to music for two years as a result of his burdensome depression. When FOSH came to town, his musical fast was broken and happiness seemed within reach again. Next, Eleanor fetches a letter from the people of Chudleigh in Tasmania. FOSH visited this little town in a time of utter crisis. Bushfires were raging across the countryside, leaving many without homes and farms. The night was nearly cancelled, what with the locals in such a nightmarish state of stress and panic. They decided to go ahead, however, and the result was remarkable. A sell-out night at the Chudleigh Hall saw a battered community come together in a time of great hardship, stand by one another’s side and say, “We’ll be okay.” 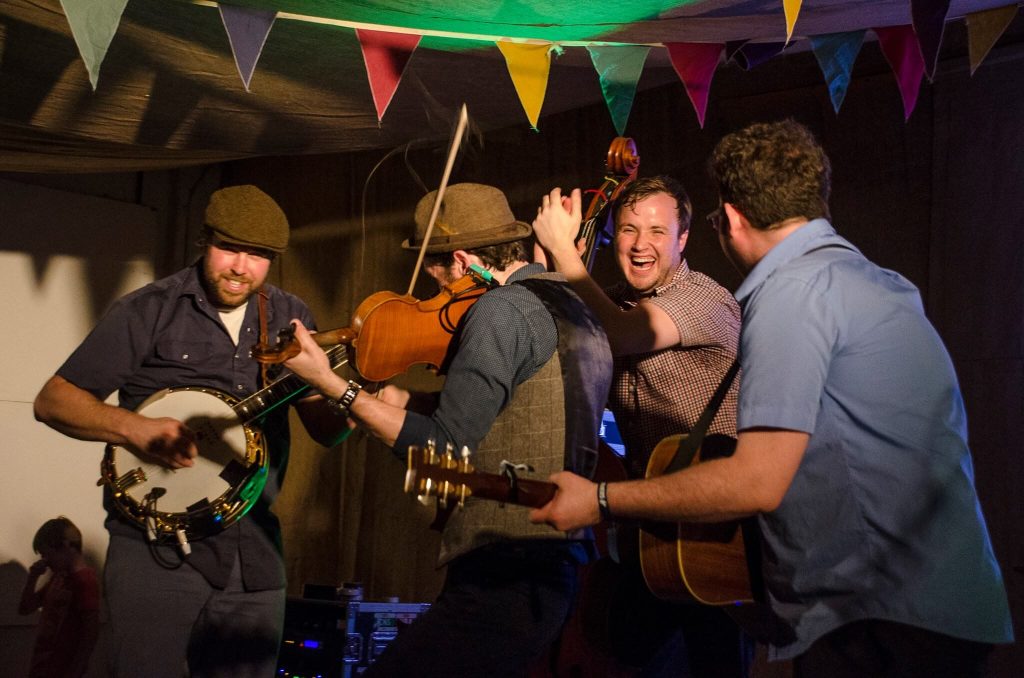 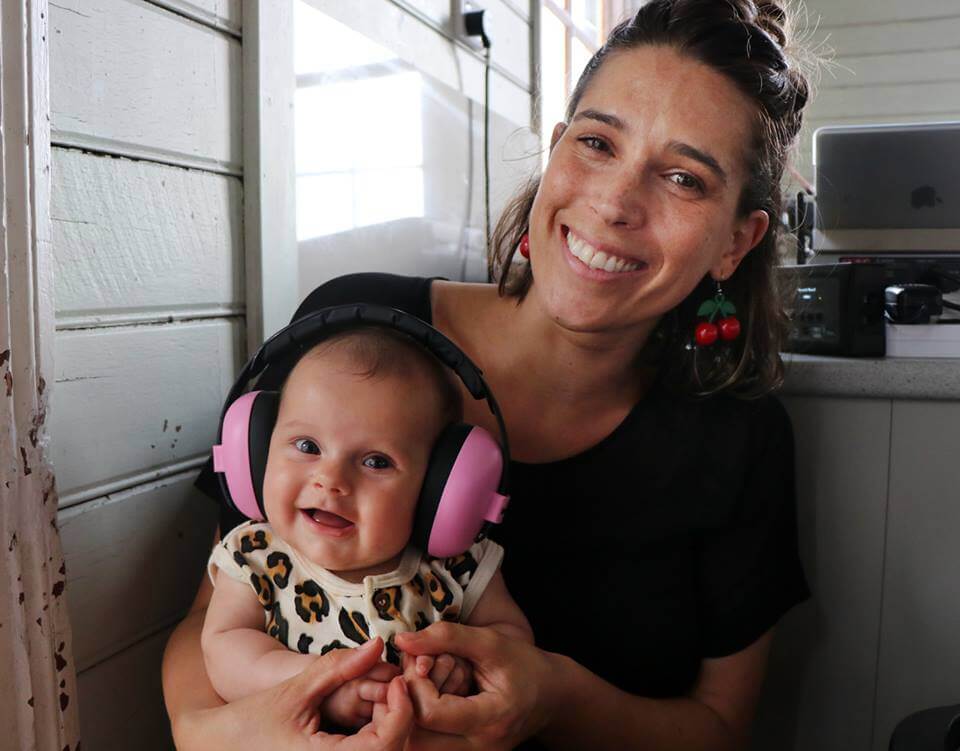 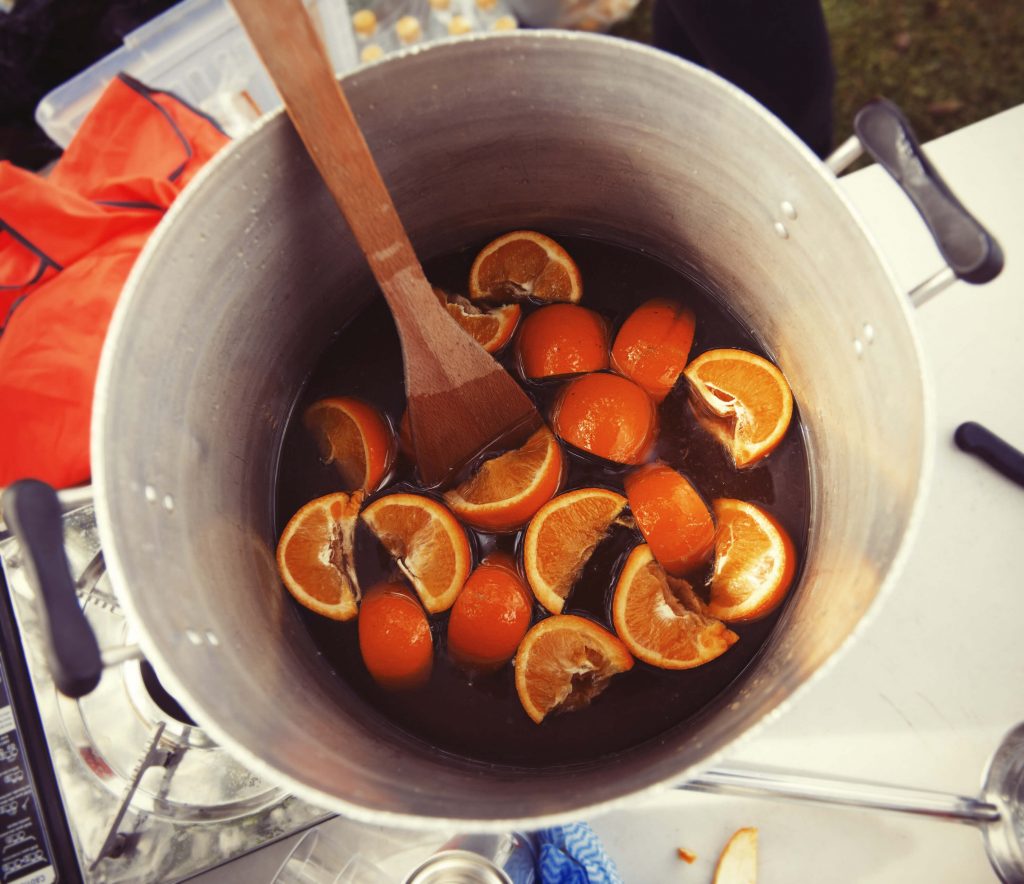 The reason Eleanor set out to be a lawyer all those years ago was so that she could help people. She didn’t end up in a court room but there’s no doubting that she is doing just that. Her deep-set passion for this project is evident in her words, her excitable desk-climbing and her long, pondering silences. “To be honest,” she smiles, “I love being out on the road and that sense of endless purpose you get when you’re staring at a horizon and there’s just empty road in front of you. It’s so beautiful and everything is just right in the world. I love that.” May Festival of Small Halls continue to touch the hearts and stir the souls of those in all corners of our sunburnt country; there’s certainly a lot of ground to cover. Whether you’re travelling around in a van, live locally or haven’t been back home for a visit in a while, swing into one of these small but mighty outback communities for a fun-filled night of music, mates and merrymaking. Explore the full list of shows and grab your tickets here. 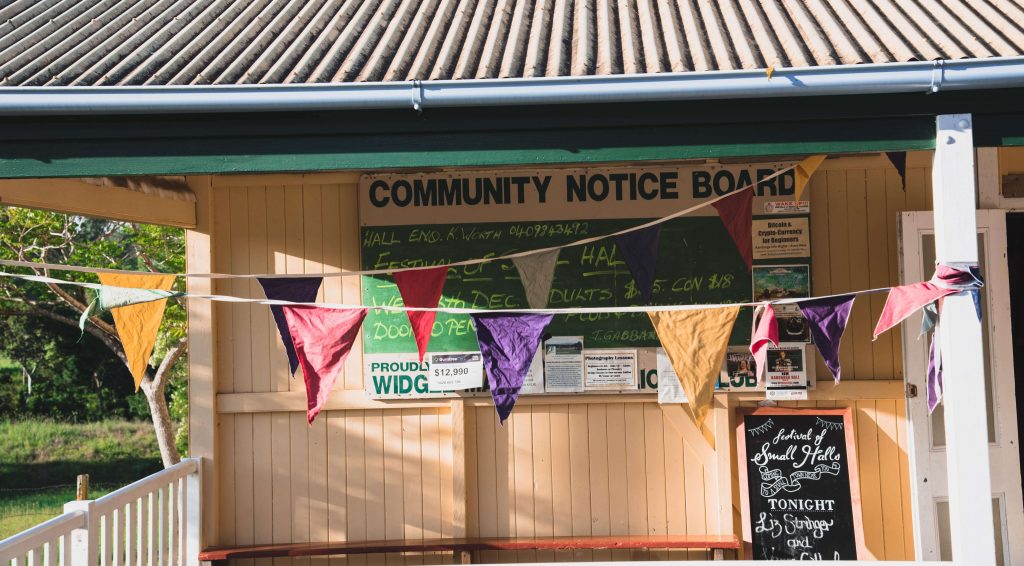 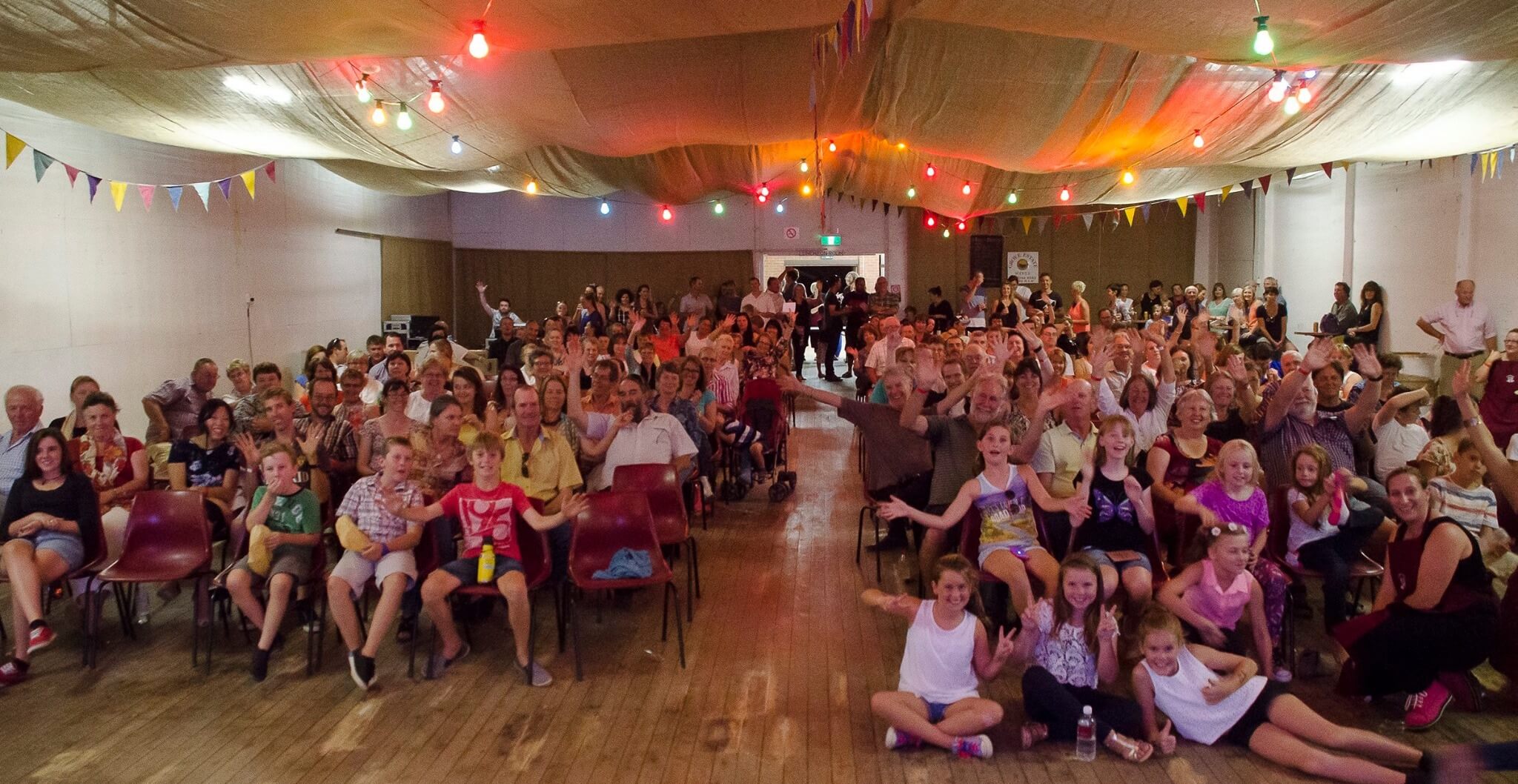