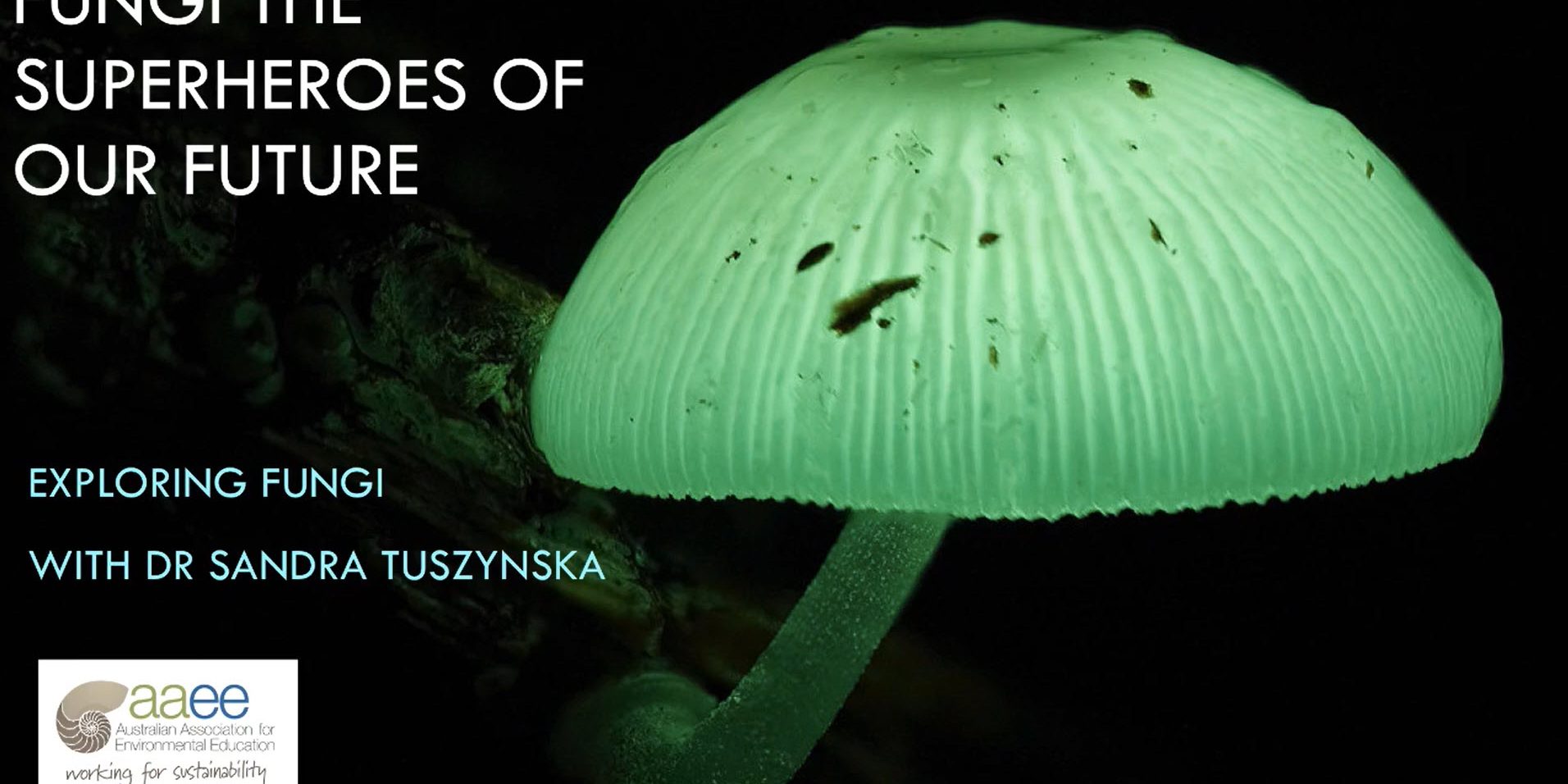 The first Mycology Research Project engagement was hosted at Woodfordia on the 26th of October, 2019.  Dr. Sandra Tuszynska, a passionate mycologist and an avid mycophile (a lover of fungi) took participating citizen scientists on the fascinating journey of the discovery of fungi and their capabilities, through a presentation entitled Fungi The Superheroes of Our Future.
The journey began with the history of fungi ruling the world some 420 million years ago, as giant 10m tall Prototaxites. These giants were the creators of first soils, as they decomposed rock into minerals and broke down organic matter. Today we have an estimated 2.2 to 3.8 million species of fungi, but only about 800 000 have been studied and described. This really accentuates the need to study and discover these very essential organisms.

Fungi the Superheroes of Our Future – Introduction Part 1 – Mycorrhizal Fungi from Woodford Folk Festival on Vimeo.

Sandra describes what fungi actually are, how they differ from plants and animals and why they belong to their own kingdom. Fungi have a fascinating growth form called the mycelium, a conglomerate of individual, long cells called hyphae which excrete enzymes to consume anything from rock to organic matter. Mushrooms and other fruiting bodies are actually just the fruits or flowers formed by the mycelium for the purpose of reproduction. The fruiting bodies disseminate billions of spores, which fly through space colonising other planets.

So why should we care about fungi so much? Well, it is all about their function in our ecosystems. It is through the symbiotic relationships of mycorrhizal (root fungi) with plants, that plants were able to colonise the planet and create oxygen, paving the way for animals and all other life forms to thrive on Earth. Mycorrhizal fungi not only provide plants with nutrients but also ensure plant immunity and provide a communication system across entire forests, called the Wood Wide Web. These root symbionts sequester up to 70% of all carbon fixed by plants into soils, feeding soil microbes, making soils healthy and biodiverse ecosystems. They are nature’s fertilisation systems, they are what plants need and we need to work with these fungi to restore agriculture, in forestry and reforestation of polluted, mined and degraded landscapes.

Other types of fungi also colonise the entire plant, these are called endophytes (living within plants), they provide drought tolerance, immunity and many other services to plants ensuring their health.

Fungi the Superheroes of Our Future – Introduction Part 2 – Decomposers from Woodford Folk Festival on Vimeo.

The decomposers are the fungi we encounter on decaying logs and in leaf litter. They come in many shapes, colours and sizes when they fruit, but their purpose is to break down all organic matter back into soil, remineralising the soil, feeding the soil ecosystem. The mycelium of decomposers is nature’s glue, as it consumes the decomposing organic matter it creates a mycelial mass which can be moulded into shapes and dried, creating everyday objects such as bowls, bricks, tables, chairs, insulation and anything we wish to grow to replace synthetics, plastics and other non-biodegradable toxic materials we are currently polluting the world with.

Many decomposers also break down pesticides, plastics, preservatives, petrochemical spills and other environmental toxins, there seem to be no limits to what these superheroes can do.


Fungi the Superheroes of Our Future – Introduction Part 3 – Mycofabrication from Woodford Folk Festival on Vimeo.

The Mycology Research Project aims to engage citizen scientists in the discovery of fungi and their superpowers. There is so much to be discovered, learnt and investigated for a better future, filled with the power of mycelium.

We hope to see you at our future citizen science activities. Click here to register your interest.